skip to main | skip to sidebar

The plan is for me to attend the whole 3-hour service at the Friends church in Kamenge, a block away from the clinic where my workshops have been held. My lift from Adrien is not very prompt, so I miss the first half hour. As we drive up and ease into a parking space, I notice a lot of people clustered round the church building, some looking in and some greeting and talking to each other. Florence arrives and takes me to a side door. Two chairs are reserved for us, next to the various pastors, at right angles to the children's benches. Florence says there are probably 1000 people inside; they need to be getting on with the larger church being constructed adjacent to this building, so the others can fit inside.

As we sit down and greet our neighbours, a group of a dozen men makes its noisy way onto the raised area at the front. They are enacting the Israelites' journey through the desert from Egypt. Moses, with a briefcase, is being berated, quite fiercely, by the other men. The props for the others are staves, bundles and baseball caps. They shout at him, he sings a prayer (which they harmonise). Ah! God tells him what to do. He crouches down, banging his stave along the ground. The men huddle near the ground, obscured by the lectern, keyboard etc. The tension eases. They get out their plastic mugs – the same design as for drinking water in the workshop yesterday – and drink deep. They leave to cheers and applause.

Visitors are welcomed. I go to a microphone, with Florence beside me to translate. I have never spoken to so many and I say so. I read part of my travelling minute, using its quotation from Ecclesiastes and a verse from Genesis to show cultivating the ground as doing God's work. Enough.

Several choirs sing, each performing 2 songs. One choir has two young male soloists who jump about vigorously throughout. (Later they do a double act with shakers and fancy stepping during the offertory.) Each choir has rehearsed carefully and accompanies the words with gestures. In front of me many of the older children join in quietly with words and actions. Some members of the congregation sing along. As each group leaves the raised area there are cheers and applause.

After the offertory, the children file out and their benches are carried to various spots under trees. Next the sermon. It lasts almost an hour. The preacher uses not only his voice, highly amplified, but also his whole body. As he describes how Jesus saved him from being murdered by a gang, he writhes and throws his head back, calling out to heaven. He moves from Deuteronomy to Matthew, exhorting everybody to act lovingly to at least one needy person. The address is frequently punctuated with 'Alleluia' 'Amen'. Florence moves between calling out suggestions, joining in general responses and giving me a translation – usually of the bible passages I have in front of me.

It is very, very hot. I excuse myself and slip outside for 5 minutes. At least there is an occasional breeze. When I come back to my place Florence commiserates: 'Only 15 minutes more.'

The heat and the sound level are almost unbearable. So why don't I walk to the bus stop and take myself home? Well, it's tempting, and I know the way well enough not to be an obvious target for a thief. On the other hand, there's something uplifting about the mood of rejoicing in this huge community. We've had theatre and a concert. As well as Adrien and Florence I see Edith, my translator for the workshops, Alexis, the clinic doctor, and many of my students. Children and adults greet me, taking my hand or embracing me. I feel genuinely welcome in this community of faith.
Posted by Elizabeth at 18:59 2 comments: 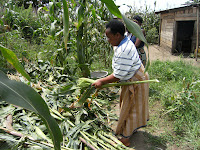 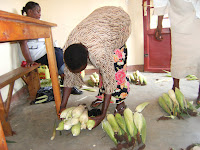 Behind the clinic at Kamenge, a poor suburb of Bujumbura where my workshops are taking place, is a piece of land which might eventually be used as a hostel for patients. Meanwhile at the far end by the back gate is a small room with tables and chairs, and a kitchen area with bamboo walls, partly roofed. This is a small restaurant - not just a canteen for the clinic. It raises around $50 a week, which is used for micro-credit loans for HIV+ patients.

The rest of the land is waste ground, I have been told. Last July, US work-campers here asked me for advice by email on how to start cultivation and I advised making compost. Even when Alex arrived in November, nothing was planted. When I looked at the site for the sack garden project on Wednesday we walked into an enclosure of full grown maize underplanted with sweet potatoes. The soil is rich. I thought I must have seriously misunderstood something. Or was there another adjacent barren plot?

The explanation was simple: Marcelline, one of the clinic staff, had decided to make a start.

On Thursday, even as we were planting the seeds in our sack, she fetched a machete, summoned a helper to carry the cobs, and cut the crop. Alex, my American colleague, commented that she had only ever seen harvesting done by machine.

I gave a variant of my usual lesson on rubbish and compost - how new materials such as plastics need treating differently from organic rubbish, how dangerous are the fumes from burning plastic, how we need to learn new habits for new circumstances. How it is up to the people who live here to decide whether to do anything new, while my contribution is to sow some seeds of ideas.

I had thought the clinic might start a demonstration compost heap, using the peelings from the restaurant kitchen of course. As the session broke up I heard that they were going further: they also planned to divide up the land to give small plots to patients with no gardens. (This will be even better than trying to establish sack gardens in odd corners, because gardening will become a social activity.)

At the end of the afternoon session Marcelline was all smiles and excitement. I was taken to the room that serves as a laboratory where testing for HIV and diabetes is carried out. The cobs were divided into heaps all over the floor. There must have been at least a hundred. Alex and I were asked to help ourselves. I took two. Then the workshop participants and staff members were invited to take a pile each.

I brought my two cobs back to the office, where I offered them to Florence, a HROC facilitator I have met briefly in Rwanda. Would she like to take them home and perhaps bring me a portion tomorrow? No, she will cook them here. There is a kitchen but I haven't used the electric hotplate. I strip the cobs while F gets a pan. We break the cobs into portions and set them to boil.

The corn is delicious - not sweet but full of flavour. Florence gathers up the peelings, walks to the door of the first-floor office and returns immediately, empty-handed. Later, when everybody has eaten, I contemplate the husks. I already have banana peel, used peppermint teabags and other assorted rubbish accumulating in the bin in my room and I don't know where to empty it. I take the husks to the door, look over the wall, see a bonfire site - corn peelings, paper, plastic - and drop the husks onto the pile.

Technical PS: posting images is very dodgy. I'm trying to send a photo or two but keep getting timed out.
Posted by Elizabeth at 06:17 No comments: 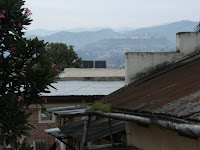 It's hard to believe it's only 72 hours since I left home on Sunday evening.

On Monday instead of sitting for dull hours in the airport in Nairobi I got a transit visa and went to meet F/friends old and new. A highlight was participating in the afternoon session of a HROC advanced workshop run by three facilitators – 2 from Rwanda and one Kenyan – and in English. (My Swahili is even worse than my Kinyarwanda.) Healing and Rebuilding Our Communities has been running for a couple of years in Kenya, where AVP (Alternatives to Violence Project)is also much in demand. I also managed to spend some time with Sarah Anusu, a Kenyan member of the 2008 Friendly FolkDancers tour which first took me to Rwanda.

Having landed at 6.30 I took off for Bujumbura at 23.40. So once I'd queued for a Burundian visa, collected my 2 heavy suitcases and been driven through the warm darkness, I was glad to go to sleep knowing I had arranged an easy day for the rest of Tuesday.

I am staying in the guest room at the Burundi Friends Church office, which also houses HROC Burundi and other programmes. Alex is another AGLI volunteer who has been here for 4 months working on capacity building with Friends Women's Association (FWA) – a programme set up by the Friends Church but not owned by them, which makes its main work with HIV+ women easier. She stayed when she first arrived in what is 'my' room for the week, and was able to help with locking the door – tricky when a pull dislodges the handle – before pointing me to money changing and an internet café for breakfast.

Actually I don't need the internet facility as the office building is connected. Not all is straightforward, however: follow through is unreliable and I've already lost a couple of messages while trying to send them. So I'm not composing this on line and the picture I'm hoping to attach – of the view from the office door – won't be embedded.

The rest of Tuesday went on discussing my programme of 3 workshops before my flight to Rwanda on Tuesday afternoon; buying seeds, which was unexpectedly difficult; deciding I didn't need a café meal and dining on cheese from the first flight and some little cakes, some peanuts and a carrot, bought round the corner.

Today, Wednesday, was day one of the first 2-day workshop, attended by 15 women including 3 staff from the clinic at FWA, 4 men and 3 babies. I had re-read a lot of my materials since leaving home, and thought of some new approaches. Filling the demonstration sack doesn't lose its interest for me, and always entertains the participants. Seeds have been chosen for planting tomorrow, once the sack is staked and slits cut in the sides. Then composting will be a main topic. We've already considered the differences between a naturally self-sustaining forest and conditions in modern Burundi. I've given the figures on the nutritional benefits of some AIVs (African indigenous vegetables). I've used the nutrition chart (for vegans) that my daughter spotted in a Truro health shop.

It's hot and sticky. Now at 6.30 night is falling but I'm assured downtown Bujumbura is quite safe to go in search of supper. So I'll attempt to post this and attach a photo, then leave you all till next time.

PS No response from blogspot then, so I went to eat and am now about to ry again.
Posted by Elizabeth at 18:17 No comments: