skip to main | skip to sidebar

Off the beaten track

Sundays are usually reserved for church, but our various commitments have meant this is the only day that Antoine can drive me, with Annunciate and the two girls, to somewhere I have been wanting to visit ever since I heard about it from Dorothy, and English F/friend who worked in Byumba at the teacher training college for VSO.

You won't find Rugesi in the tourist guides, as far as I know. It doesn't have a website. It is a semi-secret wonder. This steep sided valley, like most of the others, had its swamp drained in the decades following independence, when claiming more fertile flat land for cultivation seemed to be the priority. In this case a natural rock barrier retained a large body of water, home to the crested crane which is Rwanda's national bird, but whose population was continuing to dwindle – like so many species in so many parts of the world.

In the 1970s a Belgian with a big house nearby (since dismantled and its stones re-used) thought he could use the drained valley to grow flowers for perfume and breachedd the dam. The authorities were pleased enough to have a level route for a road linking Byumba and Ruhengeri. Local farmers made good use of the land when the Belgian left, benefitting from all the run-off silt from adjacent hills stripped of natural cover.

Enter Meg Guillebaud, English daughter of missionaries in Burundi, educated close by in Uganda. After returning post genocide to help her elderly parents who felt obliged to come out of retirement and offer their knowledge of language and culture, Meg became ordained as an Anglican priest and worked in Byumba as a canon at the cathedral. (I met her there in 2010.)

Meg became the driving force behind efforts to replace some swamp land in order to mitigate the bad effects of unchecked drainage: falling water tables, less rain, no fish... In 2000 the government decreed that a dam be constructed to restore the marshes. It is not the custom here to consult anybody. Local farmers lost their best land and were forbidden to cultivate within 50 metres of the lakeside; a secondary road had to be upgraded on the side of the valley; wild fowl were not to be eaten; the area was designated as a national park.

Meg and other forward looking people from Byumba did their best to minimise any bad effects. Bird observation towers were constructed, solid boats constructed for tourist use, land bought for an eco-lodge and planning permissions obtained. But then Meg became ill, went to Kenya for diagnosis then to England for treatment, and so far has not been able to return to her beloved adopted country.

A small group continues to offer visits, and hopes in time to continue the sustainable development of the unusual resource. I made phone contact with Elisha, who acts as a guide, and he and Antoine discussed arrangements.

We met in Byumba, collected life jackets (compulsory after a shocking incident where school children panicked in a boat and 2 drowned: few Rwandans learn to swim and most are frightened of water) and copies of Meg's booklet about the cranes, and drove to Rugesi, led by Elisha on a moto because our car was full.

I'll tell the rest of the story in pictures. 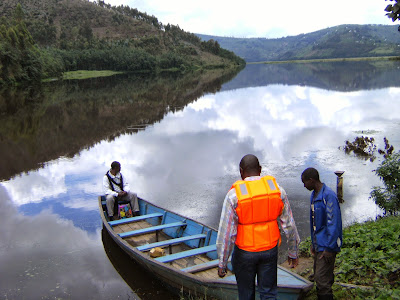 Antoine is first into the boat after Elisha 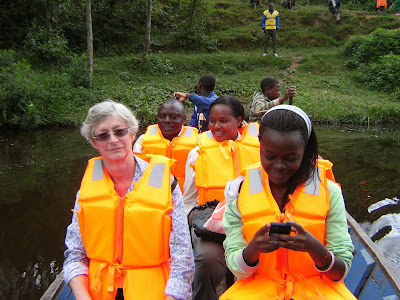 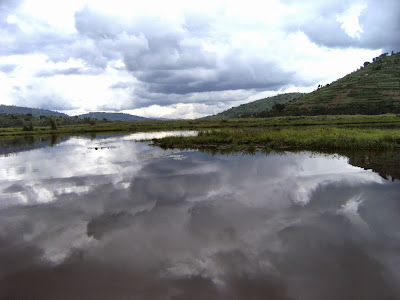 The lake is before us 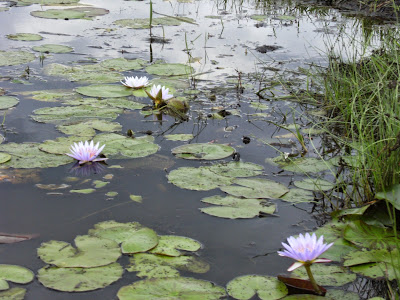 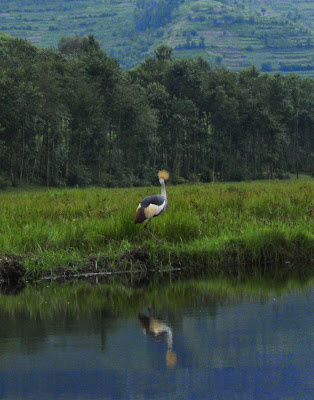 Then a solitary crane 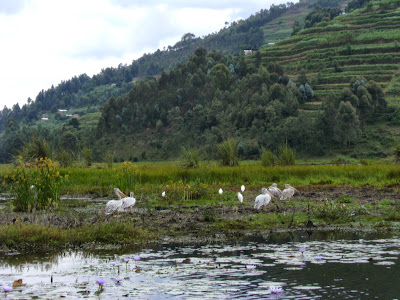 Moving slowly and quietly along channels cut in the floating vegetation, we are close to pelican and spoonbills, ducks and a lapwing fiercely defending her young against a circling hawk

After two hours in the boat we return to the tiny village. As we approach the shore Annunciate confesses that she was very nervous of being on the water but now feels quite secure in the boat.

Dorothy has suggested I might like to give some moral support to the little library, set up in a small room at the back of the church on the initiative of a Peace Corps volunteer. Most of the books are in English and for children though you can see some adult titles to the right. The village would like some books in Kinyarwanda for adults. Reading seems to be gaining recognition and moving beyond textbooks and the bible. Hopefully this community will find ways to move forward. 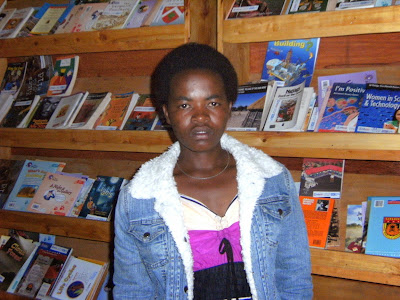 The librarian is persuaded to have her picture taken